Film It In Massachusetts: The View from New England Studios

Film It In Massachusetts: The View from New England Studios 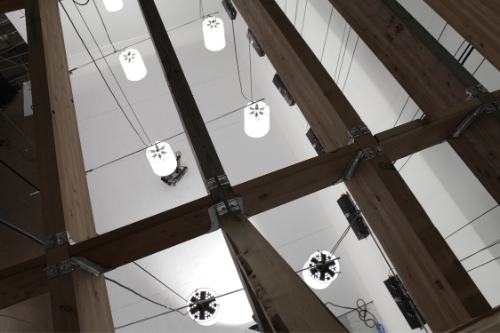 I’ve got a great view that I wanted to share with you today, I am standing in the perms; the rafters, to some; the catwalks to others. It reminds me of being at the Boston Garden watching the Celtics back in the Bird era. Larry, Robert Parish, DJ. Oh, those games against the Lakers.

The feeling is similar, but different. I’m not cramped, overheated and shouting to hear myself. There is a lot of room in our perms, you can traverse your entire lighting grid and never have to crouch once, and it’s quiet. In fact it’s so quiet you can hear two grips talking from across the studio and I’m forty-six feet above the sound stage floor. Beneath these wooden perms PBS’ “Cook’s Country” (an America’s Test Kitchen’s production) is building a set to film its next season. It’s a new, gleaming kitchen. You can check them out at CooksCountry.com or AmericasTestKitchen.com. It’s quite a production.

And its not being shot in NY or LA, it’s happening in Massachusetts.

More and more producers are discovering the New England region and Massachusetts as a home for their productions. The landscape transitions from ocean beaches to snow covered mountains, with an amazing selection of locations in between. It’s also less expensive to shoot here and the pool of film and television professionals here is top notch. How do I know so much about it? Well, it’s my job. My office is at the beautiful, state-of-the-art, New England Studios, an easy drive from Boston.

I was sitting in that office the other day in the sunny warmth of October and thinking about our organization’s philosophy: “promise what you can deliver and then beat expectations.” We have this New England sensibility. A little old fashioned. No chest thumping, just do your job. Yet, it occurred to me – telling people what we have to offer isn’t bragging, it’s communicating. So, we are going to try to communicate with you and make you aware of some of the incredible projects and people we have been honored to work with.

As an introduction, we opened our doors in 2014, we’ve learned the power of film and job creation and there’s no finer film studio in the world. We’ve made it easy for you to check out everything we have to offer on our site. We’ve hosted commercials, rock videos, music rehearsals and our first feature, Tumbledown, the Bron Productions film starring Jason Sudekis and Rebecca Hall, critically acclaimed at the Tribeca Film Festival.

In 2015 we were thrilled to welcome New Line Cinema and their production of Central Intelligence,, featuring the incredibly funny Dwayne “the Rock” Johnson and Kevin Hart.

Presently, we also have Screen Gems in house working on one of their new projects, called Cadaver,, on an incredible set. So, welcome Americas Test Kitchen. And welcome Screen Gems. And if you are reading this right now, we look forward to welcoming you, soon at New England Studios.

More to come; but for now:

Film it in Massachusetts. Film it at New England Studios.