An analogue eye in a digital world – an interview with Director, Troy Smith

An analogue eye in a digital world – an interview with Director, Troy Smith 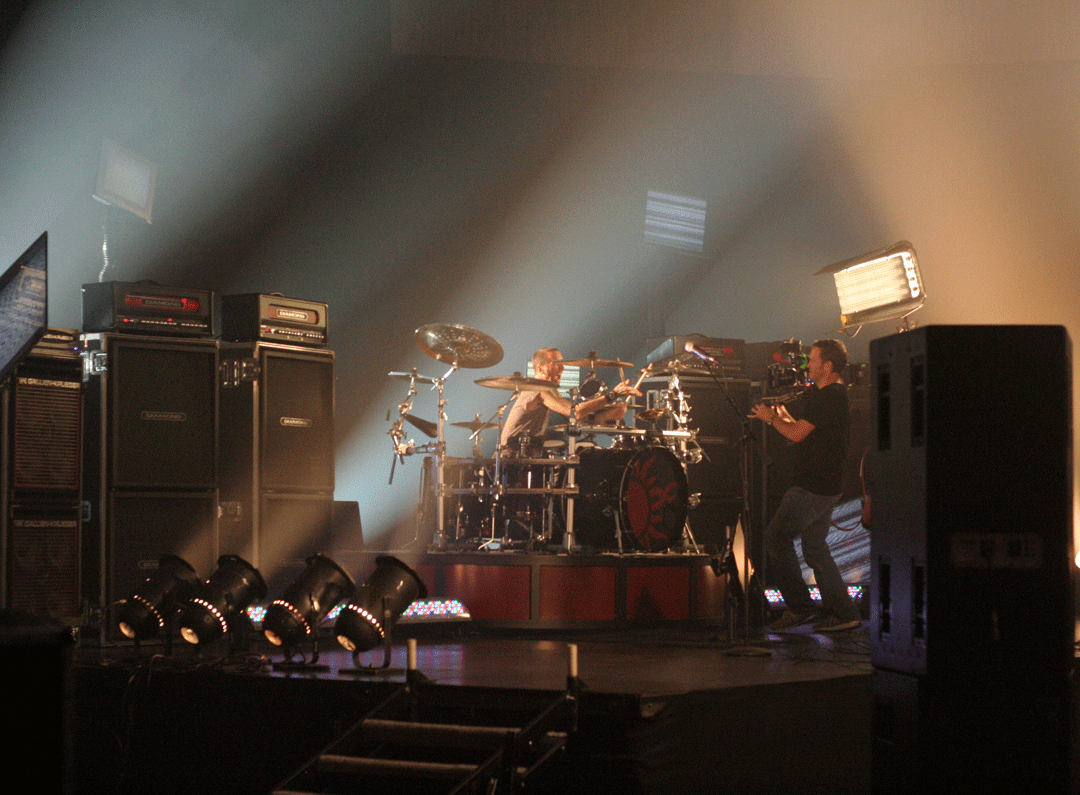 “I love that studio. I was quite surprised to see how big it was and how professionally equipped it was. I keep telling people that it rivals any LA studio I’ve worked in, including Paramount and the big studios.” – Troy Smith

Over the past 25 years, Troy Smith has established himself as a director who has embraced the best techniques and practices of the past and has brought that knowledge into the digital age. We talked with Troy recently to discuss his latest directing project at NE Studios, Godsmack’s “1000hp” music video, and what lies ahead for him.

Q: So, how did the video come out?

A: It came out great. You can check it out on Godsmack’s YouTube page.

Shot on location at NE Studios, the primarily black and white video is a powerful mix of high-energy performance, contrast lighting and retro clips celebrating the band’s almost 20 years together. 17 million records later, Godsmack still brings anger to the stage, as demonstrated by the fans who attended this year’s successful RockStar Energy Uproar Festival featuring the band.

Q: Let’s talk about the video. It’s the debut single for Godsmack’s 6th studio album. They’ve sold 17 million records worldwide; there must be a lot of pressure. How did you pitch this?

A: Well, at first (lead singer) Sully (Erna) was talking to the Strauss Brothers who had done the Godsmack “I Stand Alone” video, and they had offered him a great deal. They wanted to do a big special effects video, but at the end of the day, the budget came in too high and they couldn’t make it work.

At that point Sully asked me if I would be interested in directing the video and my response was, “Whoever does your video, I’ve got your back, you just let me know.” He asked me to do it and we started talking about a heavy special effects thing, but the SFX houses in LA and NY were way too expensive, so we changed gears to make this a cool performance video. We came to the realization that the fans wanted to see a big budget performance video because they hadn’t done one in four or five years.

So, we based the song on a cool performance where we would integrate the history of the band, because the song talks about their past, coming from nowhere and hitting the big time. We took a bunch of historical footage from their archive and put monitors on the set, ran static through them and then transitioned into the historical footage of the band in post. We just told the story of what’s going on with footage and a really killer live performance.

Q: What was your lighting concept and how did you pull it off?

A: Well, it was pretty simple. I wanted to shoot in a black void, so I hung a lot of drape to black out the place. And I just did a very simple lighting scheme because I wanted really nice contrast because it was going to be black and white.

Really, all I did was use 5K key lights and Leico lights for backlights, then we brought in some theatrical stage lighting and some moving lights in the background that basically made columns of light that would move around a little bit and go on and off. We added some simple par cans on the side and put a guy on the lighting console and had him do what he would normally do at a live show, but simplified for the look of the video.

Really simple 5K key light with a show card snoot for a nice soft key and a nice slamming back light with a little haze to get the columns to show. Finally, we added a couple of LED strip lights on stage for accent.

Q: What did you choose for lenses?

A: I went 100% with Cooke S4s Prime Lenses. To me, those are the best lenses that are available. Some people would argue that there are better lenses out there, but these are the ones I love. They really do a beautiful job with skin tones and faces. And I did the whole thing handheld.

A: Yeah, the whole video. I had a dolly on set but I only used it to set the camera down between shots (laughter). I was really sore the next day, it was like doing squats with a 40 pound barbell on my shoulders.

You can see Troy’s physical effort in the final product; constantly moving, bringing energy to the shot, but always maintaining critical focus, something not easily accomplished with prime lenses on a moving subject. The talk turns to a different subject, the NE Studios themselves. This was a one-day shoot that was wedged into press appearances for the band and pre-production for the upcoming tour. There was a lot riding on a successful day and Troy shared his experience.

Q: Let’s talk about NE Studios a little bit. What did you think?

A: I love that studio. I was quite surprised to see how big it was and how professionally equipped it was. I keep telling people that it rivals any LA studio I’ve worked in, including Paramount and the big studios.

Q: Well if it has an LA feel, it’s because Gary Bastien designed it and he’s behind some of the best studios in the country and around the world.

A: The place itself is awesome and the people there were equally as awesome. They provided everything I needed and more. The lighting and grip guys were awesome. They knew what they were doing. There were zero problems. They got me everything I needed in short order, especially because I had to hang so much black drape and the perms were so high. But they supplied everything quickly and professionally. I couldn’t have gotten the job done without them.

Q: How about those elephant doors? You can back a semi right onto the stages.

A: That’s exactly what we did. We brought in a lot of their stage gear and lighting gear and built up 3 foot staging. They just backed the whole semi right onto the stage and unloaded right on set. It saved a lot of time.

Q: The elephant doors open between the studios as well. What kinds of ideas did you get when you saw that capability

A: Well it looked to me that it was really well set up for episodic work, where you could have a lot of permanent standing sets and shoot for six months. I have a lot of friends who produce episodic and it looks like the ideal place for it, as well as long term big features where you could build some pretty heavy-duty sets. I think that any episodic or big feature would be really happy with its abilities and that’s not to mention the dressing rooms, the green rooms and the makeup rooms, which were just phenomenal. The whole place really blew me away.

Q: Ok, so back to the video. What were some of the challenges that you had? Obviously we talked about being handheld. How long were you shooting, one day or two days?

A: It was one day. A one day,12 hour shoot. The challenge was coming into an empty sound stage and blacking out a huge area, building a three foot stage that’s big enough for the band to perform on, lighting it all, shooting it all, breaking it all down, and getting it out the door in 12 hours.

We also had technical problems with the TVs, getting them all working and in sync. When we finally got it done, I felt like I was two hours behind my shooting schedule, so that just put a lot of burden on me, which is why I just didn’t stop shooting. We pulled it off, I got all the coverage I needed, including everything on my wish list, and we got out of there without going into any crazy overtime.

Under normal circumstances that would be a pretty tall order, but Troy is an experienced director with a great DP background in music videos. He has worked with Pearl Jam, Bon Jovi, The Beastie Boys, Erykah Badu, Destiny’s Child, and Rage Against The Machine. His specialty is lighting, and he puts a lot of effort into getting his shots to look right. From his days shooting 16mm to the demands of modern digital production, Troy has always found a way to get it done beautifully, on time and on budget. We talked about how image production has evolved throughout his career.

Q: Things have changed since the first time we met on the set of Godsmack’s video for “Awake” in 2001. Tell me about that shoot.

A: Yeah, back then I was shooting with a couple of ARRI BL3, Technocrane, and just a whole bunch of toys! It was a pretty big budget video.

Q: Obviously, lots of things have changed. Unless you are working on massive franchise features virtually no one gets the budgets they want. How have you adapted?

A: Well, obviously you have to adapt a lot to the lower budgets, but my mindset hasn’t changed, I want to deliver the absolute best that I can with the resources I have. The trick is I have to do it with smaller crews and smaller budgets and less toys. You just have to modify what you are doing. The good thing about digital is that the cost savings you get from not having to process the film now goes back into the budget. I still shoot with Arri, but it’s an Alexa and it gives me a film look, and it’s a little easier to light because I don’t have to use the big lights that film requires because of the slower stocks. The Alexa is 800 ASA and it looks fantastic. I guess for me it was ” adapt or die” and I chose to adapt.

Q: Does that change the way you shoot?

A No, I still shoot the same way because my eye is always on the finished product. As a former DP and AC, I know what coverage I am going to need and I know how long it’s going to take me to get it. I have always worked in that manner. I will say that even though it’s digital, I don’t overshoot, because I’m used to that film mentality which is ‘If I got it, I got it, I know I got it, and I’m moving on.’ That way I can get a variety of coverage, not just the same stuff over and over again. Even when I was shooting 1000’ mags I was only getting 11 minutes of film, so it’s just the way that I work.

Work, indeed. Great work. Troy is currently directing a feature length documentary on Godsmack’s 20-year career and has his eye on his next feature project.

For more information on Troy, please visit his website troysmithdp.com